Clare V. Koogler was born in Las Vegas, New Mexico in 1894.  His parents moved to New Mexico from Iowa where his father had been a school teacher.  In Las Vegas, Mr. Koogler’s father was the editor of one of the first newspapers in New Mexico, the Las Vegas Gazette.

In 1913, Clare Koogler was hired to teach in the Tularosa Grade School in Tularosa, New Mexico.  While there he helped establish the Tularosa High School along with the first Tularosa football and basketball teams.

In 1918, when the United States joined the Allies in World War I, Mr. Koogler went to fight.  He saw military service in France, Belgium, and Germany.

After World War I, Clare Koogler and his brothers tried cattle ranching near Las Vegas, NM.  This attempt was not successful, but as a result of the need for mail service at the ranch, Mr. Koogler became postmaster of Koogler, New Mexico in 1920.

Returning to education in 1921, Mr. Koogler was principal at Hope High School.  During the time from 1921 –1931, he was Superintendent of Schools in Corona, New Mexico; Hillsboro, New Mexico;  and Capitan, New Mexico.  Mr. Koogler helped make many improvements to student academic progress, working conditions for teachers  and physical usefulness of the school buildings.

In 1924, Mr. Koogler married Josephine Clements.  Together, they had two children, Clement and Virginia.

In the fall of 1935, C. V. Koogler became Superintendent of Schools in Aztec, New Mexico, where he served for 26 years.  Under his leadership, the school system grew from one building with twelve grades and twelve teachers to five campuses with one hundred twenty teachers serving approximately 2000 students.

For hobbies, Mr. Koogler collected coins and enjoyed fishing, hunting, and archaeology.  He loved to travel, revisiting Europe where he was stationed during World War 1.  Further travels took him to Hawaii, Alaska, Canada, Mexico, and every state in the United States.

C. V. Koogler was also active in many community organizations.  He was a member of the Masonic Lodge, Lincoln County Teachers Association, Lions Club, and American Legion Post.  He was active in Scout work, the Methodist Church and the San Juan County Archaeology Club. 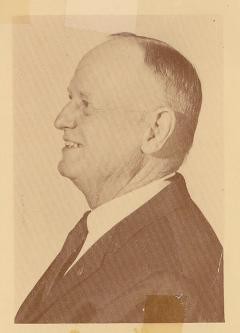